The British lower house has again found no majority for one of the alternative Brexit plans on Monday evening. Monday was dominated by a second series of so-called ‘indicative votes’. During such a vote, the opinion of the House of Commons is surveyed.

The parliament wanted to test whether a majority could be found for a Brexit plan other than that of British Prime Minister Theresa May come with.

Four proposals were put to the vote:

No majority was found for any of these four alternative Brexit plans. Even if a majority were found, it was still up to May to decide what she would do with the outcome.

Motion C, a proposal for a customs union with the EU after the Brexit, just barely found a majority on Monday evening. 273 MPs voted for this option, as opposed to 276 votes against.

This soft form of the Brexit would mean that rates would no longer be charged on mutual trade. This model is also called the Turkey model, because the country entered into such a customs union with the EU in 1995. Brexiteers are against this model, because it prevents the UK from concluding its own trade agreements with other countries.

Motion D, an even softer variant of the Brexit, was voted down with 282 votes against and 261 votes in favor. With this option, the UK would remain part of the customs union and the internal market.

The proposal for a referendum on whatever deal is being concluded was rejected with a difference of twelve votes. The fourth motion, about choosing between a ‘no deal’ and the withdrawal of Article 50, was by no means a majority: 191 members of parliament voted in favor, 292 against.

After the announcement of the result, Brexit minister Stephen Barclay announced that May is going to put her deal to the vote for the fourth time this week. It was also mentioned that a third series of ‘indicative votes’ may follow on Wednesday.

If May still finds a majority for its plan, the actual Brexit can take place on 22 May. If her deal fails, the chance of a ‘no deal’ Brexit on April 12, the new Brexit deadline, increases.

Tuesday will first be followed by an hour-long cabinet meeting. Labor leader Jeremy Corbyn expressed disappointment. He believes that on Wednesday the parliament should reconsider the proposals that have now been made. 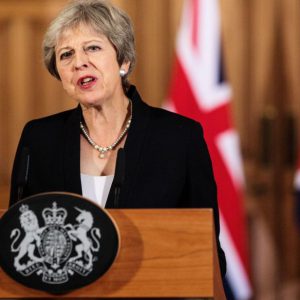 Lidl introduces 'Too Good to…

Lidl introduces 'Too Good to Waste' fruit and vegetable box